We are becoming more aware of the changing environment and the necessity of using plants that are easy to grow in an assortment of adverse conditions. I have picked 3 tried and true perennials for the summer garden that are sure to please

1. Echinacea purpurea ‘Magnus’ or Coneflower – PPA (Perennial Plant Association) plant of the year 1998. This butterfly magnet produces large stands of daisy type flowers from late June through fall generally in shades of pink to burgundy to white. In the center of the flower petals is the ‘cone’ which starts out small and round and continues to expand and push up as the flower ages eventually developing seeds. So even after the colored petals have fallen off, the cone stands tall providing an attractive seed head which the birds will thank you for. These plants will not tolerate wet conditions but they seem to thrive in anything else. There are literally hundreds of varieties out there such as ‘Tomato Soup’, ‘Cheesier’ and ‘Vanilla Shortcake’ however many of these may not perform or survive as well as many of the tried and true cultivars such as ‘Magnus’, ‘Ruby Star’ and ‘White Swan’. 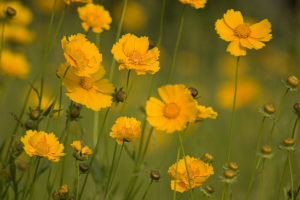 2. Coreopsis – This is an old time favorite for its long lasting golden flowers throughout the summer. Today the emphasis is on the verticillata species and/or crosses between species with many new cultivars released yearly. I have found many of these not to be hardy in our Zone 5 climate. ‘Moonbeam’ (PPA perennial plant of the year 1992) has been around for decades with lemon yellow flowers and a very open airy growth habit with tiny leaves. They are long blooming and very hardy not seeming to care where they grow as long as location is sunny. ‘Zagreb’ has also been around for years with a much more tight clumping habit with more golden flowers, but I find this one does not bloom as long. A fairly new variety I have trialed is ‘Curry Up’ which is golden with a burgundy center. It has the thick clumping habit of ‘Zagreb’ and the long blooming of ‘Moonbeam’. They start blooming in June, lasting weeks, and then simply chop the spent flowers back a few inches down the foliage stems and within a few weeks they will be back in full bloom. Attracts butterflies and other pollinators and is resistant to deer.

3. Geranium ‘Rozanne’ – A perennial that has been around for many years, was the PPA perennial of the year in 2008. This is a low mounding plant with attractive green marbled foliage. It will grow 24-30” wide covered with deep blue flowers all summer. If you find it becomes too wide as the season progresses you can simply chop it back to 6” or such, and within a short time it will be flowering again with a much tighter habit. Attracts butterflies and other pollinators and is deer resistant.