Blue-vein and plum veined Supertunias or Surfinias are one of the vest best performing petunias. Each season I plant a variety of these and have never been disappointed. They are generally available as a 4” potted plant, and 3 plants are plenty for a 20” pot. Many times I will plant them alone and other times will use a complimentary plant such as Lantana which has a stiff upright habit, thick dark green leaves and bold bright colors. These petunias are self cleaning which means they do not need to be dead headed, however they do require generous fertilizer and ample container space to remain productive. You may have seen these in a 10” hanging basket or mixed planter and by mid summer they look pretty worn out. Many times this is due to running out of space as they becomes so pot bound with roots there is no room to expand. Simply transplanting this into a larger pot can greatly extend its productivity. 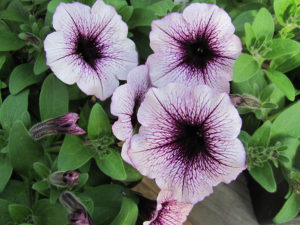 Fertilizer is the other important factor and I use a slow release capsule such as Jack’s Classicote that releases over several months in addition to a water soluble form that I use weekly or bi-weekly when watering. I rotate these between MaxSea which is a seaweed based fertilizer and Jack’s Classic. 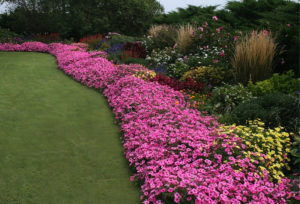 These veined varieties have a particularly tight growth habit and with adequate growing conditions will cascade with solid continual flowers over 24” easily. These plants also have good cold tolerance and will hold up well to a late frost in the spring as well as thru the first several frosts in the fall. If by chance they do get dried out and rangy you can chop them back to almost nothing, replant, pump in the fertilizer and within a 3 week period they will be well on their way to filling back in.

Try one of these petunias and you will be well rewarded.